The Stylish Men That Prove Age is Just a Number 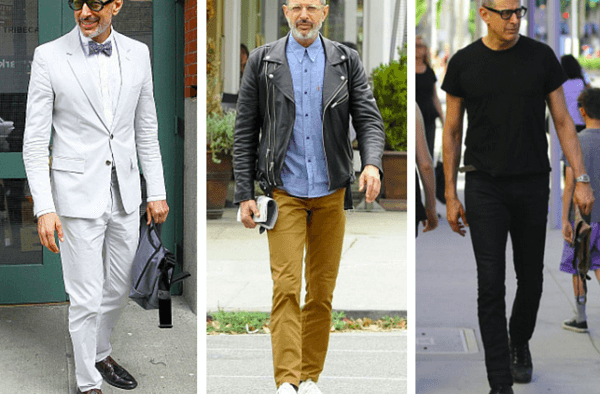 A lot of people have a rather outdated view of what older men should look like. Maybe they picture it being all about oversized jumpers, sweater vests or socks and sandals. And while comfort is a key factor when it comes to clothes, that doesn’t mean you have to throw out your suave styling when you hit a certain age. An enjoyment of fashion and style doesn’t disappear as you get older.

There are countless examples of silver haired celebrities who use beautifully tailored suits and sublime styling to look just as fresh as any man in his twenties. Day after day, these men remain easy on the eye, even as they move into their later years.

Here are just five fantastically stylish men in the public eye who quite literally stand out above the rest for their uncompromising, enigmatic styles.

The 66-year-old legend Jeff Goldblum is almost as well-known for his charisma as he is his acting chops. There’s no doubt that, alongside his charms, a huge part of the unforgettable impression he leaves on people is to do with his immaculate fashion sense.

Much more flamboyant than many of his peers, Goldblum is never afraid to add a dash of colour to his outfit. He always manages to pull off these more vibrant ‘out there’ looks by knowing exactly where the bad taste line is and never crossing it. He is proof that you can be creative with your dress sense without needing to go overboard.

Goldbum always manages to pull off these more vibrant ‘out there’ looks by knowing exactly where the bad taste line is and never crossing it.

The former Roxy Music frontman shows no signs of slowing down as he approaches his 74th year. It’s quite hard to imagine Bryan Ferry without his trademark suits and tuxedos. He’s become so synonymous with impeccable tailoring that his image is burned into fans’ mind as his trademark look.

However, he does also have a more casual side. He dresses down with a more rugged American style, with a trademark touch of zest coming from some more colourful options to contrast the old trucker’s denim. Bryan Ferry doesn’t have as varied a wardrobe as our last entry, but he shows that a few good looks can really go a long way.

Just like out last pick, it’s hard to imagine Pierce Brosnan when he’s not sporting a suit – and that’s not just because he looked so dashing in one during his stint as James Bond.

The Irish actor is quite a conservative dresser, and his outfits are not as inventive as some of Goldblum’s looks. However, he is a perfect example of how an older man can continue to look fantastic without needing to reinvent the wheel fashion-wise. Brosnan’s classic style is proof that if it ain’t broke, don’t fix it.

Brosnan is a perfect example of how an older man can continue to look fantastic without needing to reinvent the wheel fashion-wise.

Although much less well-known to all but car enthusiasts, Stephan Winkelmann – the CEO of Bugatti, and formerly the president of Lamborghini – certainly has a lot of pressure to look the part considering the elite nature of the companies he has been in charge of.

While we are certainly not going to suggest he looks better than a Bugatti – few things do –, he does manage to look as though he belongs at the head of such a stylish company. He’s German born but has lived in Italy for most of his life, and that really sums up his style. It’s sensible but with an undeniable flair.

He’s perhaps not as much of a style icon as some of the other men on the list, but Phillip Schofield’s simple approach to fashion is one that he pulls off with undeniable success. Not only that but it’s a straightforward, elegant way of dressing that doesn’t cost a fortune or require painstaking styling to emulate in your own dress sense.

Usually seen in a simple shirt and trousers combination, this can be spruced up with a top-quality jacket. We even see him get creative from time to time. It’s an ideal look that can take you effortlessly from day to night, without the need to strap on a tie.