How to Wear a Waistcoat Casually 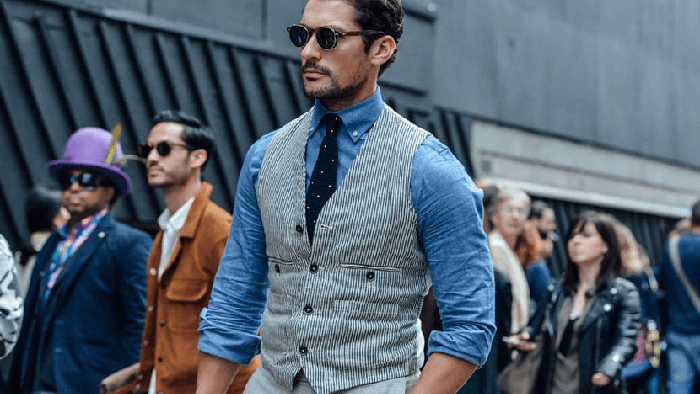 Waistcoats are a great way to add a little je ne sais quois to your look. Worn well, this sartorial saviour simultaneously slims down your shadow, while adding depth to your outfit. And although waistcoats have long been reserved for formal events, times are changing for this accessory. The popularity of smart casual style has now made the waistcoat an acceptable addition to otherwise laidback looks, despite its fundamentally formal nature. The likes of Chris Pratt, Ryan Reynolds and David Gandy have all sported this style in recent times, so why not follow in their fashionable footsteps?

But wearing one casually is a bold move, and a single misstep can unravel your whole look. So before you rush out and throw on a waistcoat haphazardly, there are a few things you should bear in mind.

While waistcoats are no longer exclusively part of a three-piece suit combo, you should still keep them away from jeans and T-shirts. First thing’s first, always wear a button-up, long-sleeved shirt to help maintain your suaveness. If it’s warm enough, you can skip outerwear, but otherwise, try sporting either a plain blazer, a smart jacket like a Harrington or bomber, or a dapper overcoat or peacoat. When it comes to accessorising, all you really need is a tidy watch, and a tie if you fancy it, though if you’re aiming for as casual a look as you can assemble, ignoring neckwear and simply undoing a few buttons will do.

While waistcoats are no longer exclusively part of a three-piece suit combo, you should still keep them away from jeans and T-shirts.

When it comes to trousers to wear with a waistcoat, you can’t go wrong with a pair of chinos — perfectly straddling the line between smart and casual, they offer plenty of variety when it comes to colour and comfort. Other good options include simple checked wool trousers or plain corduroy or linen legwear. And for shoes, ditch your dressy footwear and plump for something more understated. Plain brogues, lace-up boots or loafers will all do the trick.

For a casual look, the right material is crucial, which means that shiny suit waistcoats just won’t look right. They’re manufactured to look slick and smooth, so they’ll almost certainly clash horribly with a dressed-down pair chinos or other casual trousers. Textured pieces look a lot less polished, so your outfit will immediately appear more relaxed. Some good examples of textured materials include corduroy and herringbone, while tweed has been en vogue for some time now, and its intricate texture is sure to make a statement. Alternatively, another safe set is a simple wool waistcoat, such as these suave options from British menswear staple Hackett, which have been described by men’s fashion website Dmarge as “great for a mature, but contemporary wardrobe.”

Avoid clashes by sticking to straightforward combinations of colours and patterns. Pick no more than two shades, mixing and matching your waistcoat, jacket and shoes in combinations like brown and grey, beige and light blue, or dark blue and brown. Make sure you don’t wear your waistcoat and trousers in the same colour, though, as this ventures into suit territory, which is anything but casual.

Make sure you don’t wear your waistcoat and trousers in the same colour, though, as this ventures into suit territory, which is anything but casual.

If you do want to incorporate patterns, limit them to just one item of clothing. Say you’re wearing a plain shirt or trousers — feel free to be a bit more experimental with your waistcoat and go for a bold print. However, for checked shirts or patterned trousers, keep the waistcoat plain, as mixing prints here would be overkill.

Previous Article
The Best iPad Versions: Which iPad is Specially Made for You
Next Article
Do I Need to Know How to Code to Run a Website?