THE GRAnaREC: THE JACKET I DIDN’T KNOW I NEEDED (by Jason Whyte)

IFull disclosure: I do not work for Graphene-X, but I am a Kickstarter backer and a customer, and Jorge sometimes sends me new products to test and review.’ve never really been that much into mid-layers. I warm up quickly when I’m working hard and the window before a mid-layer goes from “useful insulation” to “too hot” is very short. As a result, I probably wouldn’t have bought a GRAnaREC for myself.

But Jorge sent me one to test, so I tried it, and it has changed my mind. The GRAnaREC has swiftly become one of my favourite bits of kit.

The first thing to note is the design, manufacturing and fit. The GRAnaREC does not feel like the second product from a fledgling company. It’s very well made, with lots of attention to detail that you would expect from a much more experienced manufacturer. The nearly invisible pocket zips are neatly finished; the little fabric inserts in the cuffs give a bit more stretch and a premium feel. It’s a very classy product.

The only slight area in which I’d suggest an improvement at this stage is the zip – it’s a two-way YKK (in itself a good sign) but the “landing zone” for the zippers is a bit short, meaning that they can separate a bit too easily if you’re doing it up in a hurry. It’s a minor inconvenience and presumably something that can be tweaked in later batches.

The fit is what Graphene-X followers are getting used to: follow the size guide, decide how much extra room you need and the fit will match what you order. It’s important to get the sizing right, as there’s no adjustment in the hem or cuffs. 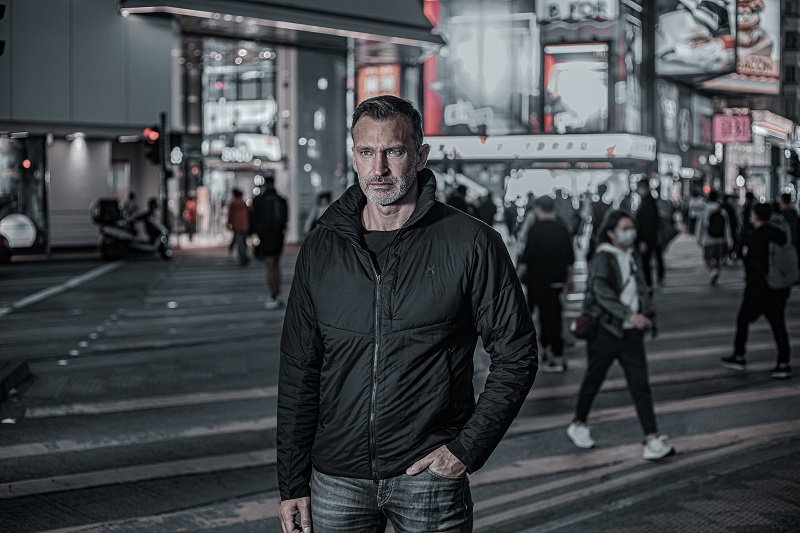 I was lucky enough to get a bit of coaching from Jorge on the size, and he encouraged me to go a size smaller than I was planning to – this proved to be good advice. As a mid-layer, you only need to plan enough space to wear a base layer underneath it. Though as we shall see, it’s a fair bit more versatile than that “mid-layer” designation suggests.

Over the first few days I used it in a variety of circumstances. I walked into town in the rain to go shopping; dashed out in a downpour to do something in the garden; used it as my outer layer on a couple of short but intense bike rides, with and without a hard shell on top; wore it under the Alpha Series jacket for a chilly evening rugby coaching session; put it on in a cold car for an early morning drive to see relatives; and even wore it around the house when I was too lazy to turn the central heating up.

It coped very well with all of these.

Over Christmas and early January, I got the chance to test it more rigorously on a series of family walks, in conditions that ranged from around 10 degrees Celsius down to below zero, and from dry through what my daughter calls “tiny raining” to a few brief but heavy showers and eventually snow.

When the weather was warmer, I needed to be careful to allow enough ventilation to avoid overheating a little, but once the temperature dropped below about 8 degrees, the combination really came into its own.

As I said at the top, usually when I wear an insulating layer with a hard shell things get hot and sweaty all too quickly. The remarkable thing with the Graphene-X combination is that once the external temperature drops into the right range, it’s never less than comfortable.

The GRAnaREC not only regulates temperature very well, but it’s so light and breathable that it feels almost like you’re not wearing anything. Where most insulating layers aim to make you feel toasty, The GRAnaREC feels more like being out in warmer conditions without a jacket.

I also stayed dry, both with the Alpha Series on top and when my daughter nicked the Alpha and I had to brave the elements with just the GRAnaREC. While I wouldn’t want to rely on the latter as my only outer layer, it coped fine with a shower. My XXL Alpha, meanwhile, served my daughter as a very effective three-quarter length rain smock.

A more demanding opportunity arose when my son decided he wanted to catch the winter sunrise from the top of Richmond Hill. We set the alarm for a time that would allow for a leisurely walk – and then were so slow getting ready that we found ourselves behind schedule.

We took a route that went up Putney Hill before swooping down to Roehampton Gate and then steadily up through Richmond Deer Park to the highest point. It was a cold pre-dawn, probably below zero Celsius, and we had to walk briskly to recover our lost time.

We reached our target point with a few minutes to spare, and sat down to wait for a dawn that was eventually less than spectacular. The winter sunlight was too weak to burn through the layer of fog that hung over the hills, meaning that the sky just became a bit lighter rather than there being a defined sunrise.

We waited a little longer and headed home.

While the view was disappointing, it was a good test of the gear. The thing that surprised me was the consistency of my temperature. Whether I was working or waiting, I always felt the same. I never felt like I was overheating, and in fact was a little worried that when I stopped moving I’d start to cool down quickly, but instead I felt the same throughout.

The same was true a week or so later, when we had a sudden fall of snow and we went out to the park as a family to build a snowman. By the end of it my toes were cold and the snow eventually overwhelmed the insulation in my gloves, but my core remained resolutely comfortable whether rolling a big snowball for our creation’s torso or standing in a queue to buy hot chocolate for the kids.

Both times, when I got home and de-layered the inner membrane of the Alpha and the outer of the GRAnaREC were slightly damp, but the inside of the GRAnaREC and Layer-X were both dry and warm – the system working as it should to get the moisture away from your body.

Overall, I’m learning that graphene insulation feels different from other forms of warm gear. You never really get that toasty warm feeling that you do with down or good synthetics. Instead it feels slightly on the cool side.

The best analogy I have is that it’s like being on the cold side of the pillow – different, but also pleasant when you get used to it.

In the past, I’ve been used to umming and ahhing about which jacket to wear for the conditions when going out, but the GRAnaREC simplifies that. Once the temperature drops into single digits, you can confidently reach for it and the main further decision is whether you need an extra layer of weatherproofing on top.

Overall, I’ve been really impressed so far. Jorge and Clau set out to create a range of clothes that you could use for multiple purposes, and I think in the GRAnaREC they have delivered on that mission.