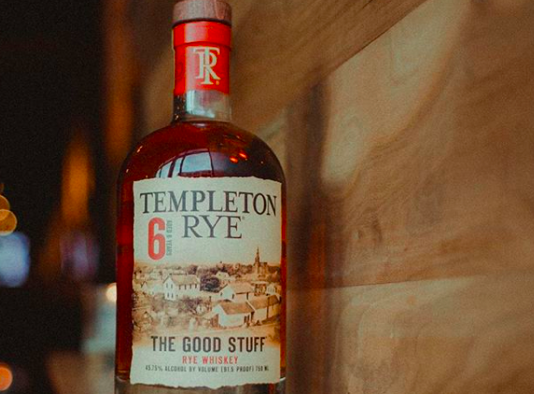 Templeton Rye the spirit, was born during Prohibition around 1920, originally referred to as rye whiskey made in Templeton, Iowa as a way for farmers in the Carroll County area to supplement their income. Local bootleggers, including famed Templeton resident Alphonse Kerkhoff, produced a high caliber, highly desired whiskey known locally as DzThe Good Stuff,dz which came to be known locally as Templeton Rye.Amber in color, it was thought to be of particularly high quality and was popular in Chicago, Omaha, and Kansas City speakeasies.

Templeton Rye was introduced in 2006 using a recipe that best matched the whiskey of Alphonse Kerkhoff.

It was said to be mafia leader Al Capone’s drink of choice and he reportedly served it to his closest friends and family. Templeton Rye was introduced in 2006 using a recipe that best matched the whiskey of Alphonse Kerkhoff. In October 2006, 68 barrels of Templeton Rye completed their four-year aging process, and became legally available on shelves in Iowa again, carrying on a family and small town tradition.

For the past decade, Templeton Rye has honored the history and the people of Templeton, building a new facility in town to create and bottle the rye locally. Templeton Rye uses a mash bill made up of 95% rye from MGP (formerly Lawrenceburg Distillers of Indiana) as its foundation. The distilled rye whiskey is brought to Templeton, Iowa, where it is finished with a proprietary formula and local purified water. The whiskey is then bottled in the production facility in Templeton