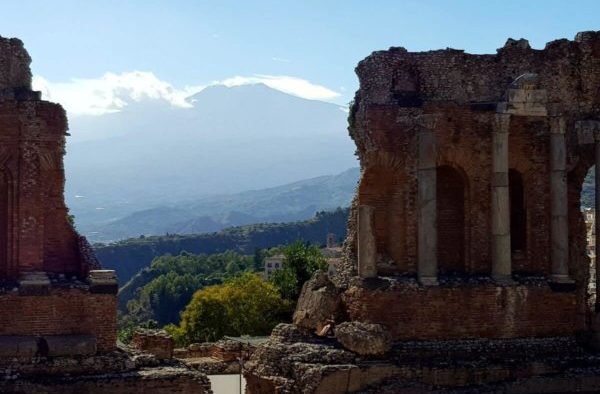 The island of Sicily: where old world architecture meets stunning views at every turn. It is the largest island in the Mediterranean Sea and is one of the five autonomous regions of Italy. Full of regional parks, historic sites, nature reserves, and UNESCO World Heritage Sites, the island is packed of things to do and see, making it an ideal destination for many. It is also the perfect place to get away for a holiday by the sea, eat wonderful food, and be surrounded by lively locals. Here are some tips and truly unmissable spots to include in your trip to Sicily.

the perfect place to get away for a holiday by the sea, eat wonderful food, and be surrounded by lively locals.

Sicily is pretty affordable in general, so you can opt for something luxurious even in terms of accommodation at a great price. There are websites like Wishsicily for example that are great for finding luxury villa rentals in Sicily. The island is full of beautiful locally owned homes in perfect Sicilian style that are available to rent, even for short periods of time.

Sicily is pretty affordable in general, so you can opt for something luxurious even in terms of accommodation at a great price.

How to move around

The first thing to consider is how to arrive on the island. Sicily has three main airports, in Palermo, Catania and Trapani Birgi, so since the island is quite large, if possible, fly into the airport that is close by where you’d like to explore. The best way to move around Sicily is by car, although you can also get around via bus. Just know ahead of time that public transportation can be slow and rather complicated!

The cuisine in Sicily is specific to the island and carries the cultural influences of those who have crossed or conquered the land historically. While there are twists on Italian staples, such as Sicilian-style “pizza”, sfincione, there are also food options that illustrate the cultural crossroads here, with both European and African influences. Luckily, the street food is very affordable and wonderfully delicious. Be sure to try panelle (chickpea fritters) and fresh seafood options!

There are a lot of beaches in Sicily, and not all of them are sandy beaches! There are some that have surrounded cliffs, pebble beaches, rocky beaches, etc.

Palermo is the capital of Sicily and is bustling with the open-air markets we talked about before! Even if you aren’t a huge fan of city life, it is worth spending some time here so you can pick up on the “Sicilian’ balanced city lifestyle.

Syracuse is a city on the Ionian coast of Sicily and is well known for its ancient ruins. Here, you’ll find the Greek Theater, Roman Amphitheater, and Ear of Dionysius. The Ear of Dionysius is fun to explore as it is a unique limestone cave!

Mount Etna is one of the island’s UNESCO World Heritage Sites and is an active volcano. You can trek up or hop on a cable car to make it up halfway to explore the volcano. The wine scene in the surrounded Mount Etna region is also picturesque and has Mount Etna as its gorgeous backdrop.

Taormina is a cliff-perched village that is and feels luxurious. It is located on the east coast of Sicily, near Mount Etna, and is known for the Teatro Antico, connected sand that leads to a tiny nature reserve, Isola Bella, and for its sea views.

Agrigento is a hilltop city in Sicily that is famous for the UNESCO World Heritage Site, the Valley of the Temples, an archaeological site with Greek temples.

Cefalù is a quaint and characteristic fishing village an hour outside of Palermo. After seeing city life in Palermo, it is a gorgeous place to slow down by the sea, and climb up La Rocca, the rock formation on the non-sea side of the village.

There is no place like Sicily. These are just a few of the ways to make the most of your time on the island and a few of the special places to visit. There will always be more!

Previous Article
Thinking of Taking a Road Trip? Here’s How to Find the Best Caravan Dealer Near You
Next Article
4 Ways to Get Your Body Summer Ready