The seven best kits at the 2018 World Cup 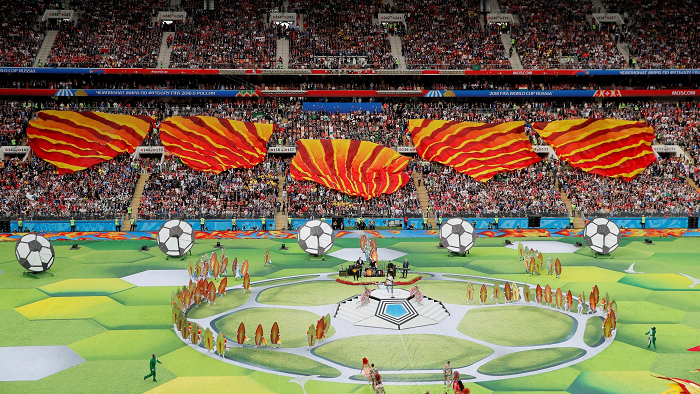 The World Cup is a festival of football – but it’s also a feast of colour. From the fans in the stands to the players on the pitch, you can’t beat a bold and colourful World Cup kit.

So, who comes out on top in the style stakes? Here are the seven best kits at the 2018 World Cup.

There’s been a lot of hype around the Nigeria kit for this World Cup – and with good reason. Manufacturer Nike describes it as a ‘subtle homage to Nigeria’s 94 shirt, with its eagle wing-inspired black-and-white sleeve and green torso’ and it’s certainly the most striking strip on show this summer. That probably explains why there were long queues outside Nike’s flagship London store on the day of release, with stock fast selling out. The Super Eagles’ official suits deserve praise too.

Retro designs inspired by kits of past World Cups are popular at the moment – and none are better than that to be worn by the 2014 champions this summer. Germany have returned to their iconic Italia 90 strip and replicated it with a modern, monochrome update. Hopefully they won’t knock us out on penalties in this one – but the 2018 outright odds on William Hill suggests Die Mannschaft should be a strong contender in Russia.

Sticking with the Italia 90 nostalgia, Columbia have embraced the era of Carlos Valderrama et al for their 2018 design. A striking yellow shirt with red and blue flashes, navy shoulders and red socks makes for the best all-round full kit combo.

You can breathe a sigh of relief right now, Peru HAVE kept their iconic sash design for the 2018 World Cup. The gold stripe is a nice touch and the simple badge helps to give this the look of a retro shirt.

The best World Cup shirts capture something of the spirit of the nation sporting them. That’s why Japan’s 2018 strip – which is inspired by Sashiko, a Japanese folk embroidery – works really well. A bold, smart blue with an intricate and effective pattern, this stands out from the crowd.

The Brazil 1970 team is one of football’s most legendary teams – and the kit caught the eye too given that this was the first tournament broadcast on colour television. The designers have decided to capture the sprit of Carlos Alberto, Pele, Rivelino, Jairzinho et al by going to Sao Paulo’s Football Museum to get an exact match of the yellow/gold colour of the shirts they wore. The result is a classic Brazil shirt, and the best worn by the Selecao for some time.

Speaking of yellow jerseys, Australia will also be bringing a splash of colour to the tournament in Russia. This shirt, however, is all about the sleeves. Perhaps a divisive feature, we think they work to help lift this shirt beyond the generic and forgettable designs chosen by others (England’s shirt, for example, is sadly lacking in imagination). Apparently, the sleeves actually reflect the ‘sea of gold’ that spurred them on to qualification in 2006, after a 32-year tournament absence, so there’s a reason behind the quirky design too.

There’s plenty of choice, therefore, if you’re a ‘football hipster’ and want to snap up a shirt for your collection this summer – or if you just enjoy the sartorial selection of delights thrown up by the World Cup.