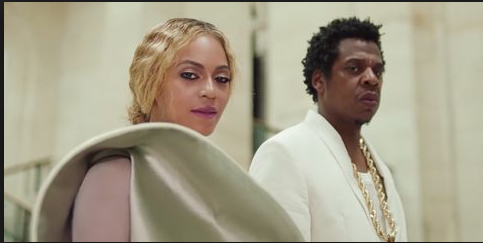 Social Media has gone haywire since the release of Beyoncé and Jay-Z song, the Apeshit. The Apeshit challenge has seen many people shooting short clips reproducing specifically Beyoncé’s wild dance scene in the video.

The couple collaborated and released a surprise album called Everything is Love. The album has already done well in the USA and UK iTunes and Apple music charts.

The Apeshit song and video is quite a remarkable artwork. Queen Bee has always something rolled up her sleeves to WOW us with. She performs the led rap alongside her husband Jay-Z. The couple really looks gangster but elegant too. We cannot talk of Mrs. Carter and leave out her impressive choreography. Did you know that at the online casinos such as joka room: online casino australia you can play your favorite games while you listening to Beyoncé?

The video of Apeshit was shot in the Paris Louvre Museum. Only one scene caught the eyes of many which then led to the Mr. and Mrs. Cater Apeshit challenge.

Beyoncé and JayZ stand in the stairway in front of the marble Hellenistic Sculpture of Nike (goddess of victory) also called the Winged Victory of Samothrace. Queen Bee who is in a long gown that touches the floors dances wildly while JayZ is relaxed.

Social media has seen people both male and female imitating Beyonce’s dance moves in the short scene. Now the Apeshit is shot in Kitchens, lounges, bedrooms, gardens, dance floors, and many other places. The mood is everywhere, YouTube, Twitter, Facebook, Instagram, you name it.

However, it seems that the Apeshit song has brought controversy attached to it. Madonna posted a photoshopped picture of the Carter couple in the Louvre Museum, gazing at the wall with Madonna’s best musical works. The picture was a part of the Apeshit scene where the Carters gazed at a real painting hanging on the wall. The Madonna photoshopped picture, the original wall has been removed and pictures of Madonna best-selling songs hanged on the wall.

Madonna posted a photoshopped picture of the Carter couple in the Louvre Museum, gazing at the wall with Madonna’s best musical works.

It is reported that the message sent was directed to the Carters illustrating that they have learnt from the master, Madonna herself.

Meanwhile, Queen Bee and the Material Girl have exchanged nasty words with each other because of that episode. Now fans have joined in the fight on social media. It’s actually a frenzy. The only place that seems safe from this battle. Try you might stand a chance to win big.

5 Signs You are Shopping at a Trustworthy Online Store
George Lavas August 24, 2018