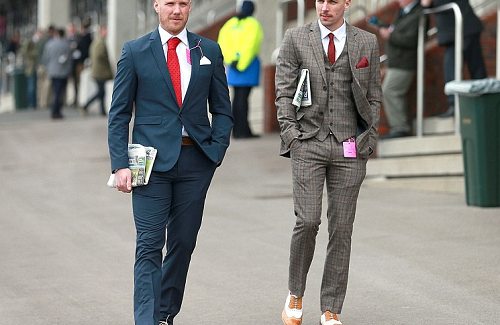 Royal Ascot is one of the biggest social events in the English summer calendar and the four-day horse racing festival in June brings together people from all walks of society. The meeting is heralded as a major fashion event in its own right with the meeting organisers dictating a fine line between the traditional standards set by Beau Brummel in the 19th century and allowances for contemporary occasionwear.

Planning for the Royal meeting involves much more than researching the form, it’s important to make sure you dress correctly for the occasion no matter which enclosure you attend. If budget is a concern take a lead from financially savvy University undergraduates using matchedbets.com to earn £1000+ in one month for a few hours each week.

There are three enclosures at Royal Ascot where a formal dress code is applied, the Royal Enclosure, Queen Anne Enclosure and Village Enclosure, and while the Windsor Enclosure is much more relaxed, smart dress is encouraged.

Entrance to the Royal Enclosure is prestigious and exclusive as attendees get to grace the huge lawns in the same area of the racecourse as the Queen and members of the Royal family.  Men’s dress code for the Royal EncIosure is strict and most traditional.

Black or grey morning dress is essential and there are strict rules governing accessories.   Waistcoat and tie is required and cravats are not allowed. Black shoes are also a necessity and a black or grey top hat must be worn at all times with the exception of within a restaurant, private box, private club, balcony, garden or the enclosed seating area with the Royal Enclosure Garden. Overseas visitors are permitted to wear formal National Dress or Service Dress while military personnel can also attend in Service Dress or equivalent.

Gaining admittance requires an application to the Royal Enclosure office and the endorsement of a member who has attended the Royal enclosure for at least four years.

Oliver Brown is a traditional gentlemen’s outfitter based near Sloane Square in Chelsea and specialist in top hats. A Royal Ascot outfit can be bought or hired with basic attire starting from around £1500 for top hat, coat, waistcoat, shirt, trousers and tie before deciding on shoes.

Alfred Dunhill has a proud history creating the finest gentlemen’s tailoring and will provide a bespoke morning suit hand cut and finished by a Master Tailor for an unmistakeable British presentation. It takes 12 weeks from measuring to final fitting so allow plenty of time if you want to join some of the leading lights of society to be dressed by Dunhill.

Gaining admittance requires an application to the Royal Enclosure office and the endorsement of a member who has attended the Royal enclosure for at least four years.

Men are required to wear a suit, shirt and tie when attending either the Queen Anne or new Village Enclosure at the heart of the racecourse. However, you are welcome to follow Royal Enclosure dress in the Queen Anne Enclosure and you’ll find many morning suits as stroll around.

Recommended suit designers this year include Hugo Boss for a full outfit of suit, shirt and shoes while Reiss jackets and trousers have a suitable blend of tradition and contemporary design that will look perfect at Royal Ascot.